I lost 50 Pounds on Jenny Craig 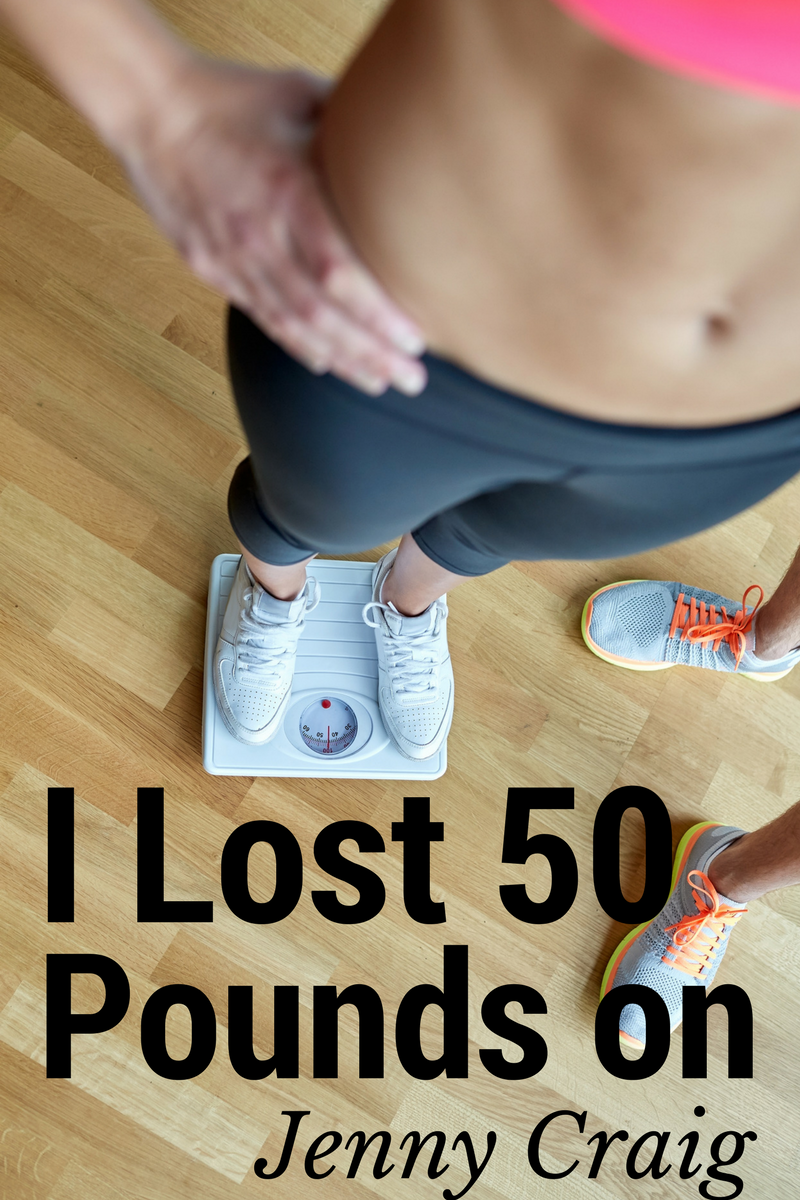 For those of you who may not be familiar, Jenny Craig is a weight loss company where you buy their pre-packaged food, receive weight loss “counseling”, attend optional workshops, etc.   They were one of the first companies that came on the scene trying to compete with Weight Watchers, and they are still around today.

Because I am a coach now,  people have assumed that I was an athlete growing up, or I had an athletic background.  That wasn’t me.  Not even close

At the time,  Jenny Craig seemed to work.  At least for the time being.    I lost a significant amount of weight while on their program and thought I had finally done it!

But what ultimately happened was my weight eventually came back. Over time.

A couple of times.  Many times. Almost all of it

I did the typical Yo-yo type of dieting for a while. Up and down many times.

Ended up with several “sets” of clothes – the skinny sets, and the fat sets, and I remember holding my breath each and every time I put on a pair of jeans not knowing if they were going to fit or not.

I, like many people, tried all of the latest and greatest “diets”, but to no surprise none of them really worked.  Oh, I could lose a little bit here and there, but the sustainability was zero.

I was also working out – I had joined a gym and was doing group classes – primarily “aerobics” classes.  They were all the “rage” back then, and I thought, “I am killing this!”

But the yo-yo-ing kept going….

After one of my weight loss periods, I was looking pretty good, feeling good, etc.  and when I talked to one of my friends regarding my concern about my lost weight coming back, yet again, she said to me:

“ Oh don’t worry about that.  You will NEVER let that happen again”

I look back on that now, and think, the ONE thing NOT to say, would have been that.

Talk about setting someone up for failure.  As someone who had already beaten herself up many times over for the yo-yo ride I was on, that comment was the worst thing for me to hear.  I already thought I was a failure, and now the pressure was on with every meal I ate, and every workout I did or for that matter every workout I missed and the “punishment” that would ensue.

What she said to me sticks with me to this day.  I remember it clearly, and remember the  intense kick in my gut.

And guess what, …  I did “let” that happen again. Not surprising at all considering I had no nutritional guidance other than to just not eat…. Not all of the weight came back on, but a good deal did.  I felt like a complete failure at that time,  because after all, I ”would never let that happen again”.

I didn’t like myself , much less love myself.  It was a huge inner struggle every day

And that cycle of gaining/losing kept going

It was a very tough time, but like most of us, I put on a strong face, and carried on.

Over the years, several things started to happen.

➜ I started working with different trainers who all helped move me in the right direction. (Thank you to all of them!)

➜I started to feel like I was getting strong.

➜I became a “gym rat” and worked out a lot – even took up running and ran some half marathons ( I was a terrible runner, btw.)

One trainer in particular really inspired me, so I decided to get certified as a trainer myself.

That was definitely a turning point, but what I didn’t realize at the time was my mindset still wasn’t in check just yet.

At the very least, I HAD to workout just to keep myself one step ahead of the weight gain train.

When you tend to be on the heavy side your entire life (on and off)  it is super difficult to get out of the “punishment” mindset.   I struggled with that for years.   And along with all of that was the notion that I HAD to workout AT LEAST 6 days a week.  I used to think that was the norm, that it was expected. Working out that much just meant you were a badass, right?

Boy was I ever wrong.  I was overtraining and didn’t even realize it.  And add to that, winging nutrition with no specific plan, and I was still not out of the yo-yo mentality

There were times I wanted to give up – quit trying.   Especially when I turned 50.  I felt like Mother Nature was kicking my ass in a big way, and there was nothing I could do about it. My belly was getting bigger, I wasn’t sleeping well, and hot flashes were kicking my ass  at night. That was just how it was going to be, I thought.    Just accept it and be miserable.

Not a great way to live your life.

I decided  after making a little bit of progress, I wanted some workout structure, and I wanted to get stronger, so I hired a coach.

I started working with a Coach who changed EVERYTHING for me.  Many people ask me why I hired a coach when I am a coach myself-why did I need to do that?

That is a great question, and a topic for another article for sure, but just like anyone else,  I wanted support, accountability and structure.  And that is exactly what I got.

Over and over again.

I made my workouts a priority.  I didn’t just say I wanted to change, I was actively working on it day in and day out.

I incorporated some nutritional guidelines that were sustainable – kept my calories in check, and increased my protein intake.

It wasn’t always easy.  I had injuries along the way ( for example, my shoulder that had been beaten up as a result of my over training before),  but we kept working around all of them.

I wasn’t perfect with my nutrition, but when I strayed off course, I would hop right back on board and move forward, without beating myself up.

Because what I was learning,  was it’s the big picture that is the most  important.  One day of not working out or not eating right was not going to keep me from where I wanted to be. Progress is not linear.  There will be ups and downs all along the way. We all have plenty of those.

Once I truly understood that concept, and understood the power of hard work and  most importantly, consistency,  I couldn’t be stopped.  I knew I could make it through anything.

As a coach myself, I think the one thing I see the most often that keeps people from reaching their goals is the true understanding that you have to put in the work – day in and day out.  Nothing will ever out do hard work and consistency.   Nothing.

For the first time:

I love how I look

I love how I feel

I realize that there will be bumps in the road, but this is a marathon, not a sprint. 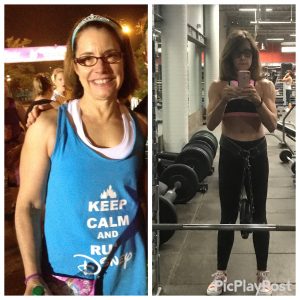 I really don’t know how much weight I ultimately lost between these two pictures, but I can tell you how much better I feel on the right, then I did on the left.

And I can tell you that I think about things very differently on the right then I did on the left.

The change has been massive.

I am strong, healthy, and feel like I have kicked Mother Nature square in the teeth.

I don’t want you to think like I did – that middle age means:

❌ You are doomed to be a larger size than you want,

❌ You can’t be as healthy as you want

❌ You can’t be as strong as you want

It’s just the opposite.  It takes work, patience, and most of all consistency, but it can be done, and it will be the best thing you could ever do for yourself.

What can you do?  Don’t know where to start?  Try changing just one thing.  You don’t have to do a massive overhaul all at once

Here are some ideas:

✔️ Increase your protein intake.  Read more about why protein is so important for fat loss HERE

✔️ If you aren’t already doing so, start moving.  Do something you like – go to the gym, go for a walk, go for a run, ride a bike

✔️ Join a gym.  You will probably get a few free personal training sessions for joining.  Use them!

✔️ If you already belong to a gym, but you are not going very much,  schedule in your calendar one more workout session than you have previously been doing (and if that number was 0, then schedule one session)

These are just a few ideas to get you going.  It doesn’t matter what change you start with.  What matters is that you start.   Just change one thing.  Keep consistent with that one thing, and it will become a habit.

Change doesn’t have to start with Jenny Craig.

Here’s to your health! ❤️

In case you didn’t know, I wrote this book Fit A

You want to improve your workouts? - Stop exercisi

Time to chat about muscle building: - You have to

Did you have pizza last night? Or maybe you had a

If you are frustrated you’re not losing weight,

Some people call it Skinny Fat. - Where you don’

This error message is only visible to WordPress admins